The Folsom Lake Trail Run is a very cool race. Inside Trail puts on a large number of races throughout the year and they’ve gained a reputation for building courses which challenge runners, sometimes brutally. Last year My wife and I ran a 50M they put on in Sausalito which had nearly 11,000’ of elevation gain and effectively destroyed my legs for a couple weeks. It was awesome.

The Folsom Lake race is their one fast course. It only has around 2,850’ of gain and stretches along the south side of Folsom Lake, right in our neck of the woods. The rolling hills out there are just enough to keep things interesting while you weave your way through the forest and fields. Laura and I had run it back in October and were anxious to find out how we would perform when compared to that first race.

We headed into this race from a completely different place. Last time it was part of a continuing effort to amass sheer quantity of miles, but this time we were both sort of coming back from a break. American River 50 had happened three weeks prior, and had been a surprising success. Two weeks after that, we’d gone up into the hills of cool and Auburn to get in some elevation; we got in about 3100’ but both felt like certified dog dookie. Laura still felt torn up from running a 50M so soon after her injury layoff, and I was just plain sick. Our midweek base miles were going well but there was a bit of apprehension about longer runs.

But there’s only one way to find out. 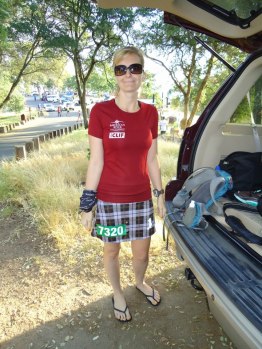 We arrived to find an unusually buzzing race atmosphere. It was laid back, but there were just a LOT of people. Odd for this race organization. It soon became apparent that there were a ton of road runners getting their feet wet (or muddy) with the shorter distances happening shortly after the long-haulers took off.

We heard lots of strange things we never hear at trail races:

“How could they run out of toilet paper?”

“I hope the aid stations have sunscreen.”

“Does that pack hold water too?”

I want to be careful here, because I don’t want to sound elitist or anything. But there is a cardinal rule for running for hours in the wilderness: If you want it, bring it.

There is no way to know if the race organizers will have exactly what you want, and it’s not their job to cater to your desires. They provide the essentials so you won’t die, and if they’re good they’ll have tasty treats along the way and tasty beverages at the end. This particular organization is very good, and people still were not satisfied. The expectation was for the race to provide everything, which reminds me of a saying this guy at work uses: “You can wish in one hand, crap in the other, and see which gets filled first.” It’s a really gross saying, but it speaks truth. Wishes don’t get it done, bring what you need. 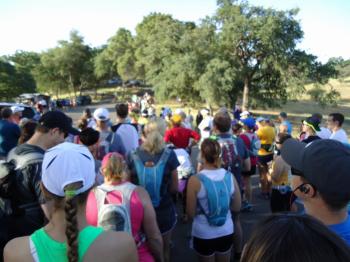 Once the race began we settled into a nice groove and warmed up, enjoying the cool temps before the sun cranked up the heat. A few miles in I began to get concerned, quietly at first, then more overtly. Laura was not flying with her usual lithesome grace, and wasn’t taking the downhills as fast as she likes to. As it turned out, ramping up so quickly after a 6-7 week layoff had really done a number on her legs. Not even 1/3 into the race, running downhill hurt. She pressed onward, though, and all I could do was try to zero in on a pace we could both run and not encounter problems. I had also taken a fair amount of time off after Rocky Raccoon, but I’m constantly walking climbing, jumping, lifting, carrying, squatting, etc for work, so I didn’t really lose much muscle. I just had to regain some cardio and I was good to go. My legs were actually feeling pretty decent. 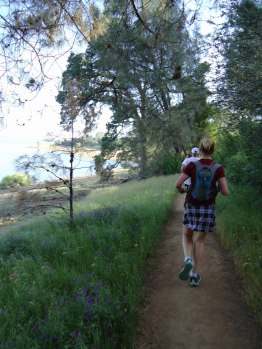 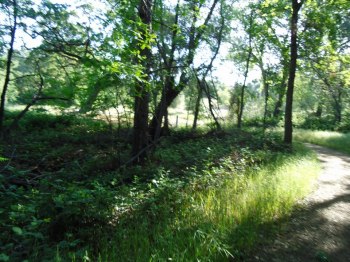 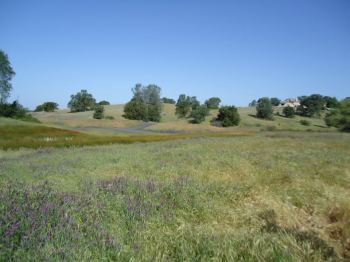 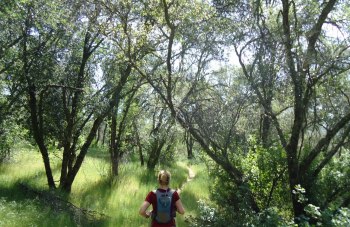 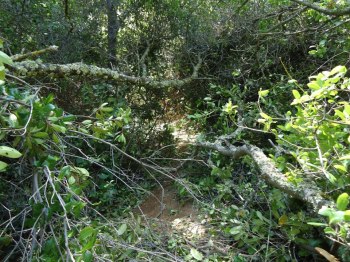 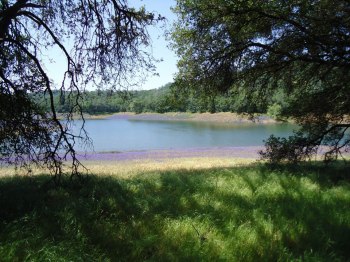 The nice thing is that even when it felt like we could be pushing harder, the pace was not that slow. We hit the turnaround in under 3 hrs, and a sub 6 finish was conceivably within the realm of possibility. The entire second half was spent running when we could and walking what we had to. I found out later that Laura felt as if every step was ripping muscles, but her legs kept working so she assumed they weren’t and kept pushing. In addition, the sun had begun roasting the lakeside and runners were dropping fast. It rose to around 90* and it was affecting us both badly. I found that as long as I could keep a bit of ice in my pack I could cool my core by drinking it in constant sips. Every 5 minutes I would take in some cold water to cool my guts. Laura wasn’t so lucky; the heat hit her hard and added to her increasingly crappy run. 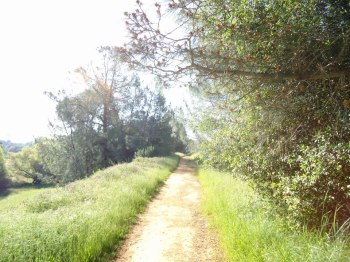 I felt powerless, running at about a “3” effort while my better half was battling at a full “5”. I would expect a DNF from anyone else, but not this girl. She kept pounding on all cylinders ‘til the deed was done. 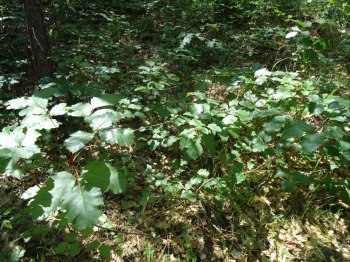 After all was said and done we sprinted in for a 6:08:45 finish, just 7 minutes shy of our PR. I missed out on placing, ranking 4th in my AG, but Laura nabbed a 2nd Place AG medal! 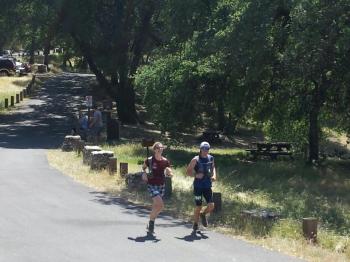 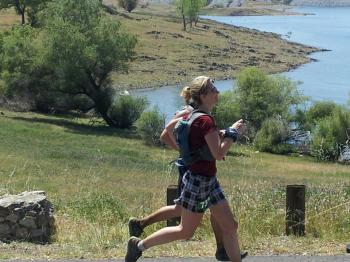 Thinking back on this race, I actually feel really good. It is now two days later and I feel fine. A little tired, sure, but I’m not sore at all. I’m in a place fitness-wise where I can throw in a 50K and trust that it won’t wreck me at all, and that is something for which to be extremely grateful.

I got to spend over six hours witnessing a clinic on guts on some excellent singletrack with a brutally tough training partner, friend, and comrade in a cute plaid skirt. I got to test my physiology in the escalating heat of the California Valley. I got to see about 15 friends at check-in, line-up, aid stations, finish line cheering squad, etc. I got to down a cold IPA and rinse off in the lake before demolishing exquisite Mexican food.

Overall, a very solid brick in the foundation for the coming year.

My friends call me Red. These are my paintings.