Saturday Laura and I headed up to Auburn for this year’s WSER Lottery Drawing. For the first time, we had our names in the hat and were filled with a mix of excitement and trepidation. As we entered the Placer High auditorium, just around the corner from where the historic race finishes, I felt the same mood emitted from a large room full of runners. There was definitely a healthy dose of hope and fear, all carried in a huge basket of nerves. 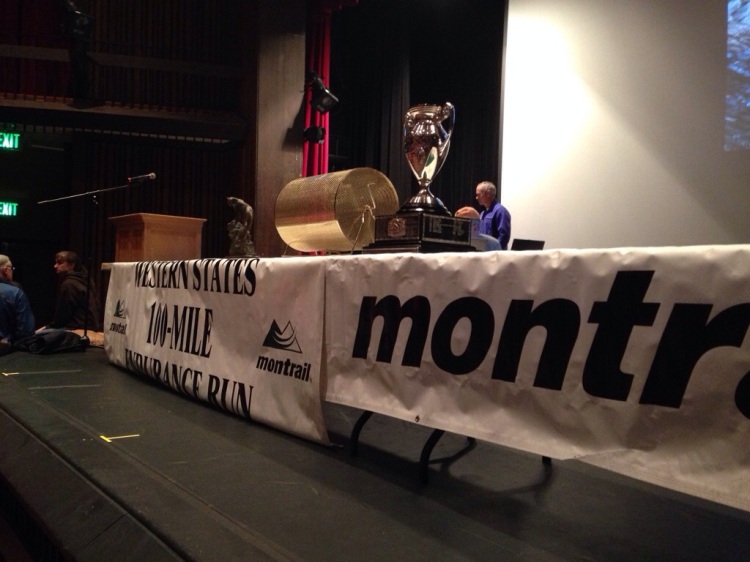 As more and more people showed up, it became apparent that it was going to be a very full house. For many, this was the last chance to get in before qualifying gets much more difficult to do. For 2015, the list of qualifying races has been chopped down to very few 100Ks and 100’s, with all 50 milers being cut out completely. Personally I think it’s a good thing, as the race was probably a little too easy to qualify for, but it will take a couple years for the national racing community to adjust, and although I can imagine many races expanding to offer a 100K option in the future, this coming year looks a bit bleak in that regard.

We settled into a nice place close to the front and kept an eye out for people we knew. There were a ton. It seemed every other person who walked past stopped to say hi and catch up. It was awesome to feel so entrenched in the local trail running community. It is one which is unabashedly friendly, unrelentingly hopeful, and soaked with ibuprofen.

As the show got on the road, we were given a breakdown of how many spots were allocated to the different types of entries. The entire team behind WSER really do everything they can to keep everything transparent, which is admirable. 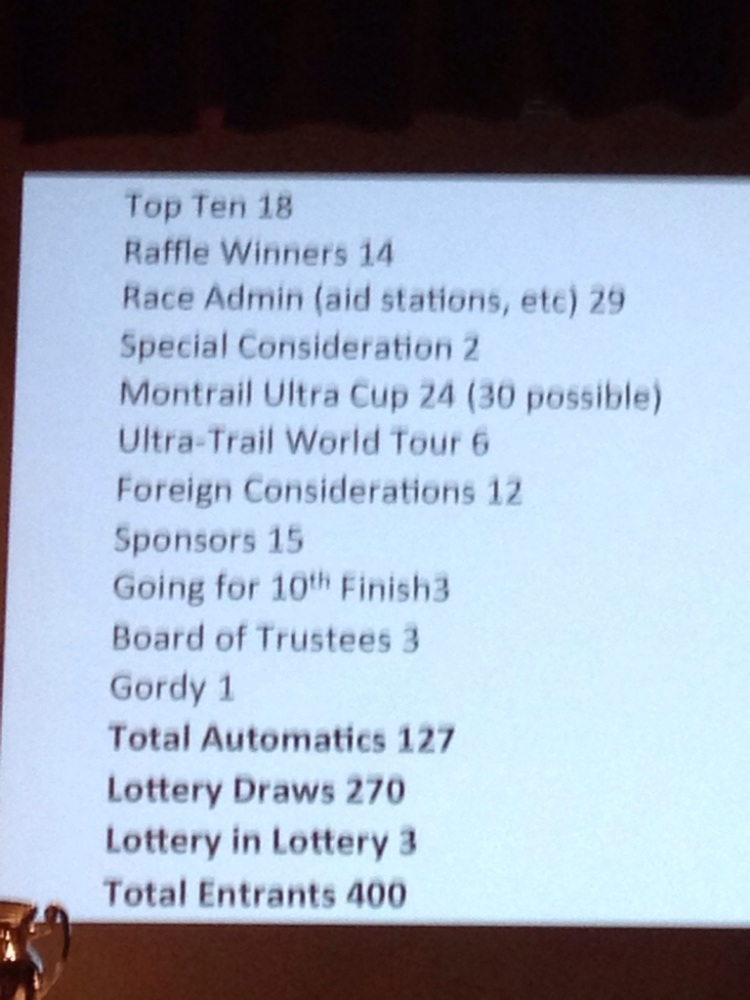 After we had a handle on the breakdown, we got a good look at our odds… 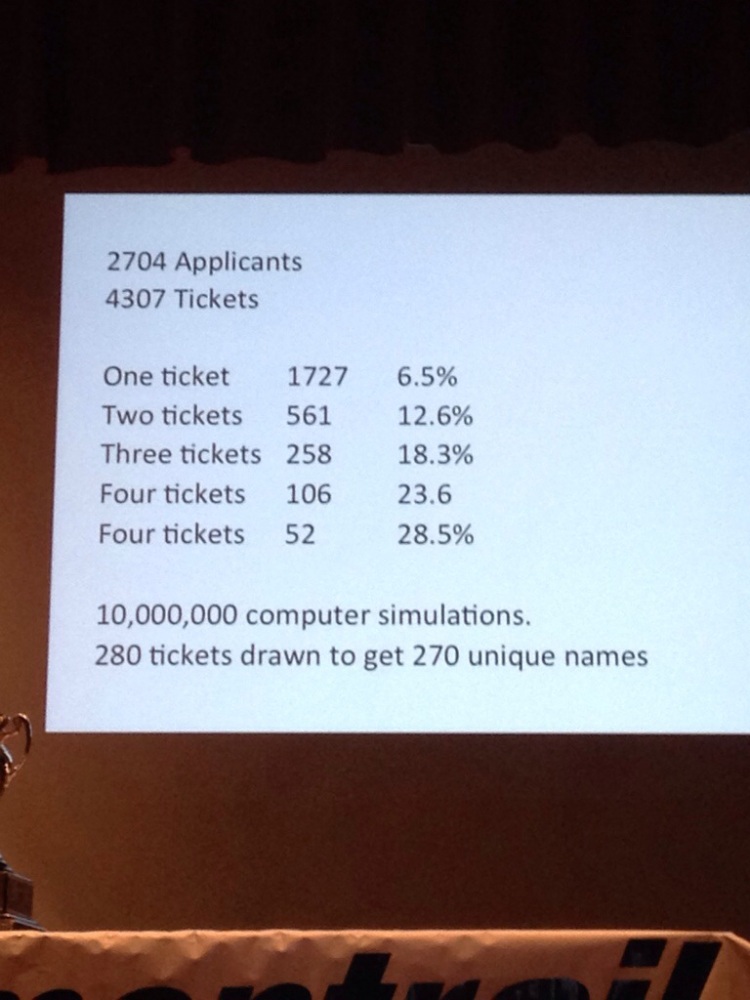 For each year you don’t get selected, you get an additional ticket in the hat the next year. With only one ticket, many of us had an extremely remote shot at making it in.

The relatively new RD began the program, explaining the process and why they choose the numbers they do. There are innumerable factors which go into this stuff that you would never think of. Many people put in hours and hours of work to make WSER happen, in most cases just for the love of the race and its tradition. 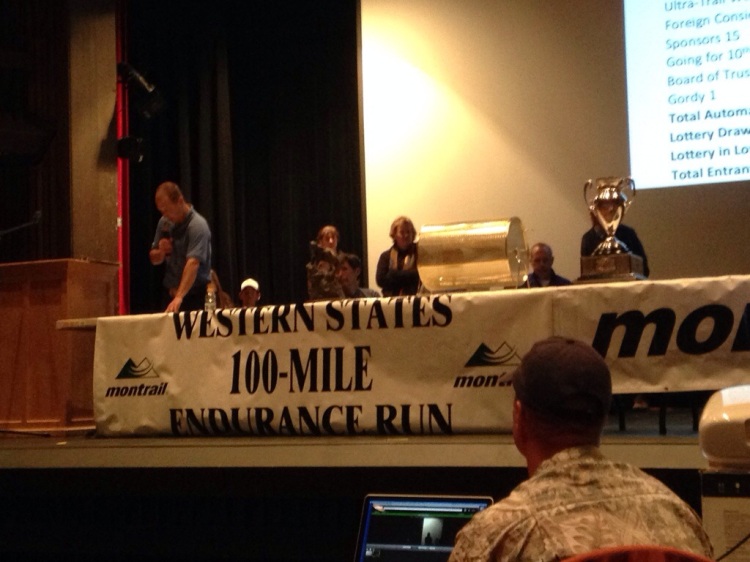 There were several guests actually doing the drawing, and the first was the man credited with first running the race, along with the horses in the Tevis Cup race back in 1974. The one and only Gordy Ainsleigh. 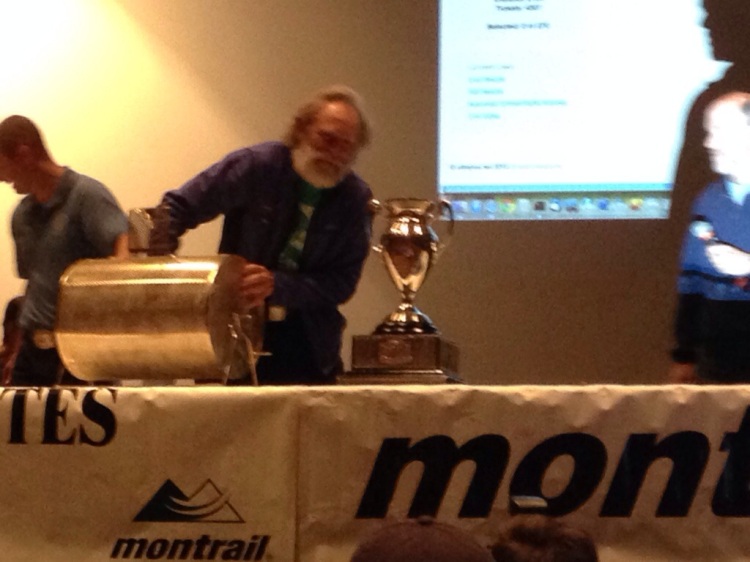 Next up was a legend in these parts, Ann Trason. She has had an incredible career and has consistently pushed boundaries for women in trail racing. 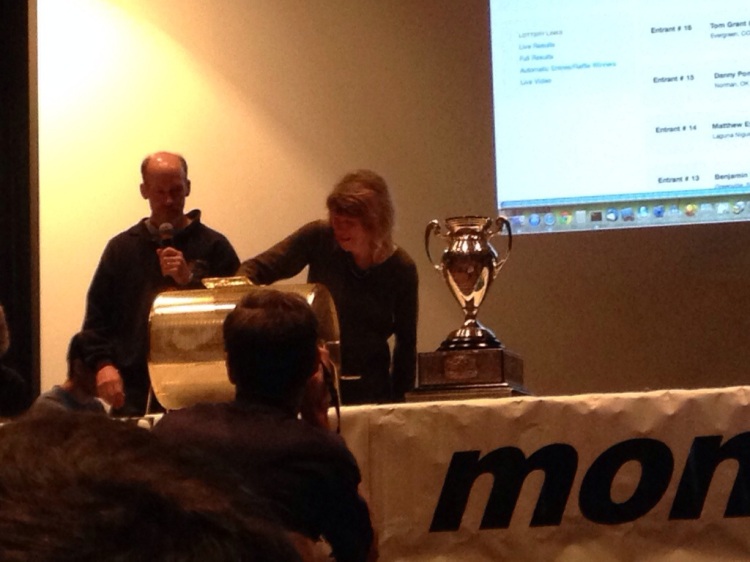 There were many other guests, but believe it or not, all those pictures turned out even worse than these! Needless to say, they were those who have given their time, effort, and souls to keep this race the very special experience that it is. They are dedicated to the integrity of WSER.

With every name pulled and announced, my heart skipped a beat. We knew so many people hoping to get their chance at conquering this legendary course that I spent the whole two hours on the edge of my seat. Whenever a local name was drawn, the auditorium erupted in cheers. When a far away friend was drawn, I jumped out of my seat. This all happened many, many times.

When all 270 names and bonus drawings were concluded, the gaggle of focused runners turned into a cacophony of commisserating and congratulating. There were smiles, hugs, and laughs, and it felt as if everyone let out a collective sigh of relief as the looming tension of the unknown instantly broke apart like thick clouds and the light of the next few months shone through.

I didn’t get selected, and in retrospect that’s the best possible scenario for me. I can train hard this year, build up base fitness and speed, and have twice the chance next year. If only I can figure out a way for both Laura and I to run it together, I will be ecstatic.

For now, though, I am happy to be alive, healthy, and part of this amazing community of trail junkies.